Why Do We Spend So Much Time & Energy on the Ride to Conquer Cancer?

We all know too many people who aren’t as lucky as my family and me. 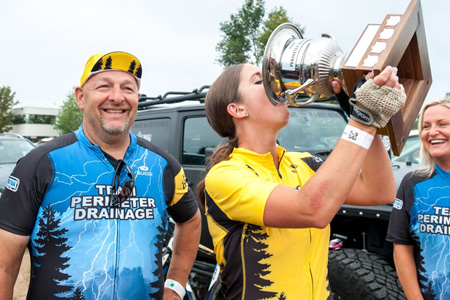 One of the most difficult times of the season is upon us, but it’s also one of the most rewarding. I thought it would be best to kick off our Ride to Conquer Cancer Drive with a quick personal story. I did the same last year, but as we all know, cancer creates so many memories – good, bad, traumatic, triumphant – so there’s no shortage of material to inspire the good ol’ Pump & Power blog.

I wish we didn’t have to do this, but as long as cancer is out there, we’re going to do everything we can to kick its ass once and for all.

I remember the smell of damp concrete on that late August afternoon five years back in Beaumont, a suburb south of Edmonton, Alberta. Alone, I was jogging up a steep incline back towards my parents house. And as if the heat of the afternoon wasn’t scorching enough; the humidity common to the region that’s responsible for some of the most epic storms you’ve ever seen made it incredibly tough to breathe.

At least I think the humidity was responsible. I wasn’t the only one who was alone, after all.

My mom is a cancer survivor. Three years after her initial diagnosis, a diagnosis that was much too grim for our family to comprehend, she was on her bike riding Alberta’s Ride to Conquer Cancer. She was barely fit to return to work after treatment, let alone ride a bike from what seemed like one end of the province to the other.

And while she was riding her bike I was pumping my legs and telling myself that if there was even the slightest possibility that I could build up enough energy to share well then hot damn I was going to do my part.

The funny thing is that she probably didn’t need the help.

We all know too many people who aren’t as lucky as my family and me. My mom was diagnosed with bladder cancer and underwent nearly two years of treatment for a condition we were told had a very low survival rate. The doctors at the Cross Cancer Institute in Edmonton were able to get us on experimental drug trials that potentially helped save my mom’s life. These trials aren’t cheap – they depend on donations and research that simply wouldn’t exist without initiatives like the Ride to Conquer Cancer.

Believe us, committing to the BC Ride to Conquer Cancer is no walk in the park – quite the opposite! But joining the Pump and Power team to ride our bikes from Vancouver to Seattle gives us an excellent incentive to get on the bike and work towards a goal with nothing but benefits all around.

The cost is time. The cost is energy. The reward? A healthy pumping heart and a potential life-saving solution for someone like my mom.

I contribute to the Ride to Conquer Cancer because I can. I’ve been through it and lived to see the other side – not everyone is afforded the same. 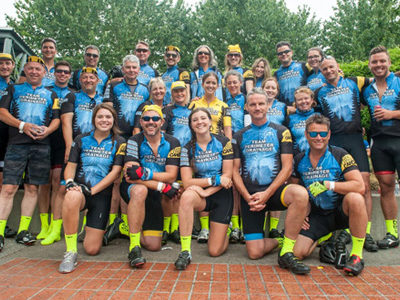 Our Team & Five Years on the Ride to Conquer Cancer
About Post Author
Chris Gray
I would like to think that myself and my main Service Foreman Craig are the two best drainage personnel in the business. We have extensive experience in designing, maintaining and installing a wide variety of drainage, sewer and water systems. We have built our company based on referrals, not thru mass advertising. This in itself proves that we run a top notch solution oriented service that allows our clients peace of mind when they hire us. I am also proud to have the ability to invest in my community. My staff have worked hard to have us involved in the following past and present community events: BC Ride to Conquer Cancer 2013-present North Shore Inline Hockey Perimeter Drainage Scholarship John Henry Jump Jam Days Greater Vancouver Food Bank Canucks Place Back in 1998, we were one of the companies to provide residential drainage video diagnostic inspections. Along with video, we also introduced drain cleaning by water jet. As our company evolved, we designed and built on of the first gas powered automatic switched generator used during power outages. People who relied on pumps would flood on every power outage. We then moved onto installing natural gas versions as the technology evolved. Other designs include changing a duplex panel to a 3-float system from 4-float. Typical design was off-on-override-high level alarm. You would never know when one pump was not working and only find out when your high level alarm would go off. At this point, both pumps would have failed and you would be close to flooding. We modified the design to allow the high level alarm to go off before the over ride switch. This would notify the owner that one pump was not operating and they could contact us to service the pump. This stopped many floods from happening. This changed the panel to now become a 3-float system where the over ride float and high level float were combined as one. We are proud to install quality products that we stand behind. This allows us to have one of the best warranties in the business. I have found thru the internet that with over 3000 satisfied customers, positive online reviews are the key to success. As we try our best to have total satisfaction in our work, we can not satisfy 100% of our customers. I think we are at 99.91% and I am ok with that. Please read our reviews that we have copied onto our site from Google and Home Stars, we also receive hand written reviews from our customers that we started to post on our site. A positive online review is the ultimate gift from a client. That means we have made that client happy to go out of their way to share their experience with my team. As we constantly are changing the way the industry works, we hope we can give our clients the best knowledge available to give them peace of mind during our less than favourable weather conditions. Please feel free to call me if you want to discuss any issues regarding design, installation and maintenance on your home’s drainage, sewer and water systems. Chris Gray Owner – Perimeter Drainage Ltd